Congratulations to these two fabulous riders who proved to the doubters that to true to the nature of early explorers of the West Coast, yes, it could and CAN be done!! It is not easy to be the 1st to do something ... Yutaka and Keith did an exceptional job!! Again, an incredible job well done. 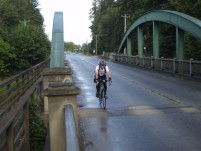 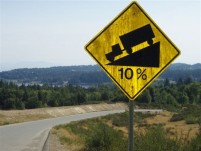 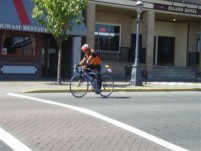 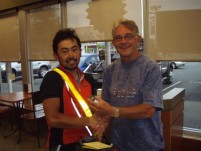 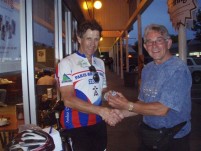 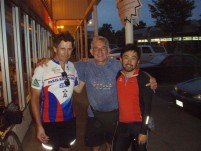 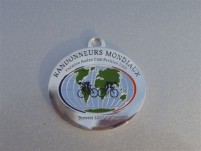 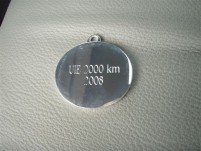 He said he'll call when he knows which ferry he will be on... like 6 AM tomorrow perhaps? :)

Yutaka sped ahead after having a Red Bull for breakfast while taking a pull... and was an hour ahead at a secret control south of Nanaimo which was atop a (another) 10% hill.... OK maybe that is why it took three hours to ride 36 km.... On top of the 2 hours sleep last night (no naps, he said it would be dangerous to lie down).

He described the ride as being 'epic'.

Weather today was hot, max. 39 degrees, with headwinds up to CR and back from Gold River. They both "collapsed" when they got in to Gold River.

Additional late breaking news from Ken Bonner: Thanks, Cheryl! I bet Keith did not tell you he and Yutaka ‘potted around’ travelling from Parksville, chatting up a touring cyclist and taking pictures of large wooden carvings. They appeared to be in very good spirits when I left them in Campbell River this morning [Saturday]. Also, I wonder if Keith took a picture of their bag-hotel room … nice flouncy white covers on the beds!! I’ll send you a couple of pictures of Keith and Yutaka at Union Bay. Cheers …. Ken

Weather today was sunny and warm, max. 33 degrees. Bit of wind out to Cowichan Lake, headwind back. 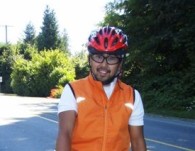 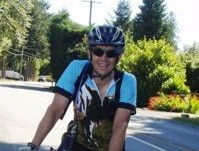 Here's the first of hopefully 6 nightly updates on the progress of Keith (and Yutaka when possible) with the Ultimate Island Explorer 2000.

He started with Yutaka, rode for 80 km before Y rode ahead. Yutaka trying to get to Parksville (674 km) before stopping...

Weather today was overcast with drizzle from Sooke out and back, most of the day.